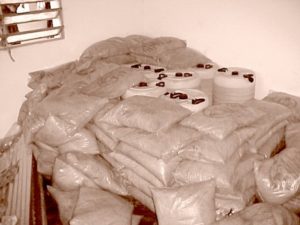 Officials of the Narcotics Control Board and the Ghana Police Service have busted a cocaine syndicate at the Tema Harbour and arrested two clearing agents and a driver of a freight forwarding company Accord Limited as suspects.

Joy News sources say the cocaine consignment, weighing about 125 kilograms, was suspected to be part of several items delivered at the port.

Kojo Preko Danqua of Adom FM who visited the Tema Port says the arrest was made at about 14:00hours GMT Monday.

The vessel, Submarine Yanger, had arrived from the United States of America under the pretext of carrying fuel, as suggested by its manifest, but a search on it proved otherwise leading to their arrest.

The goods to be cleared from the vessel were meant for a company which name was given as Formula Plus Limited.

The incident was reported to have drawn crowds of curious residents and workers who sought to catch a glimpse of those involved.