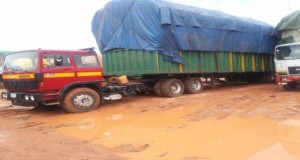 Cote d’Ivoire’s Ministry of Finance has finally allowed stranded cargo trucks at the Elubo border to move into the country after being denied entry for more than a fortnight.

The decision to allow the trucks entry was taken by the Ivorian authorities after negotiations by two delegations from Ghana which held series of meetings with officials in Abidjan and Elubo to get the Ivorian government to review the enforcement of a trade directive.

The Ivorian government, per its directive, ordered that only cargo originating from the Economic Community of West African States (ECOWAS) member countries would be allowed into Cote d’Ivoire, while goods from other parts of the world should be cleared at the seaport.

The directive is said to have been on the statutes of Cote d’ivoire since 2005 but has not been enforced until now.

The Chief Executive Officer of the Ghana Shippers Authority (GSA), Dr Kofi Mbiah, told the Daily Graphic that the paperwork to allow the truck to move was yet to be completed.

The truck drivers had been stranded at the Elubo-Noe Border for more than two weeks.

The development has affected the business of freight forwarders, the livelihood of truck drivers and their conductors, and business dealings between Ghana and Cote d’Ivoire, while the congestion caused by the 59 trucks parked at the border also had negative environmental implications.

When news of the fate of the truck drivers broke, two delegations from the Ghana Shippers Authority (GSA) and the Ministry of Transport were dispatched to Cote d’lvoire and Elubo to negotiate the review of a trade directive that resulted in cargo trucks from Ghana being held up at the Elubo Border.

The team met the stranded drivers and officials of the Customs Division of the Ghana Revenue Authority (GRA) at the border and customs officials of Cote d’Ivoire separately.

Among other things, the delegation  found out that not all the trucks were from Ghana as earlier reported, and that some of them were from Nigeria and Togo.

Though some of the cargo truck drivers had certification to show they were from ECOWAS member countries, as required by the directive, they were also denied entry on the grounds that the certificate had to be authenticated in Abidjan.

“That means abandoning their trucks and travelling about 176 kilometres from the border to Abidjan. That is not trade facilitation-friendly at all,” the Chief Executive officer  of the Ghana Shipper’s Authority, Dr Mbiah, said.

Officials of the Customs Division of the Ghana Revenue Authority at the Ghana side of the border complained that their Ivorian counterparts did not notify them prior to the time they would enforce the law.

The three-member delegation to Abidjan, which was led by the Deputy Chief Executive Officer of the Ghana Shippers Authority, Mr Emmanuel Martey, with the help of the Ghana Mission in Cote d’Ivoire, held series of meetings with stakeholders to allow the trucks to enter and deliver the goods to their owners.