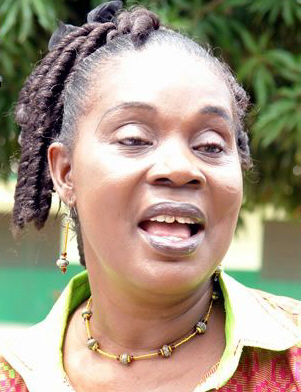 A circuit court in Accra has issued a bench warrant for arrest of popular actress and proprietor of the Peace and Love Orphanage, Grace Omabo, popularly called Maame Dokono.

This follows her failure to appear before the court Thursday to answer charges of negligently exposing a child to harm at her facility.

She is expected to be arrested and kept in police custody until April 15, the next adjourned date of the case.

The orphanage was closed down early last year after it emerged that a six month-old baby had been sodomised by an older inmate.

Grace 61, has been jointly charged with Mary Anaglate, a worker at the orphanage for neglect, operating an orphanage without a licence and exposing a child to harm.

They pleaded not guilty and were granted GHÂ¢30,000 bail with two sureties each.

Assistant Superintendent of Police (ASP) Kofi Blagodzi prosecuting told the court that Grace registered the orphanage with the Department of Social Welfare in March 2005.

He said, however, the licence to operate expired in March 2006, but was not renewed therefore since 2006 it operated illegally.

The prosecutor said in 2004, Nana Yaa Agyeman, Supervisor of the orphanage wrote to the National Commission on Children about the deplorable conditions at the orphanage but no action was taken.

It said Grace failed to employ adequate staff to manage the orphanage whilst the inmates were not fed properly leaving some of them malnourished. The inmates lived in dark and poorly ventilated rooms.

ASP Blagodzi said, as a result of the darkness due to non-payment of electricity bills, the older inmates took advantage to abuse the young inmates sexually.

He said on December 31, 2008 Grace left for Holland and left only GHÂ¢50 for the upkeep of the inmates, the situation deteriorated and complaints were made to the Department of Social Welfare that sent an official to inspect the orphanage.

ASP Blagodzi said it was recommended that four of the inmates should be evacuated, and two of them Daadum Omaboe, two years old, and Barrack Omaboe, six months old should be sent to other orphanages.

He said they were sent to another orphanage, Beacon House where it was detected that both inmates had been sodomized.

ASP Blagodzi further said investigations revealed that some of the inmates below 12 years of age took advantage of the darkness and lack of supervision to defile and sodomized the younger ones.

He said Joseph Kobby Omaboe and Adom Omaboe were put in boiling water by one of the staff called Daavi, which led to the death of Joseph on October 2006 after both had received various degrees of injury.