The global economic turmoil has resulted in reduced demand for wood, shrinking investments in industries and forest management, says this year’s United Nations ‘State of the World’s Forests’ report, which was released last week. 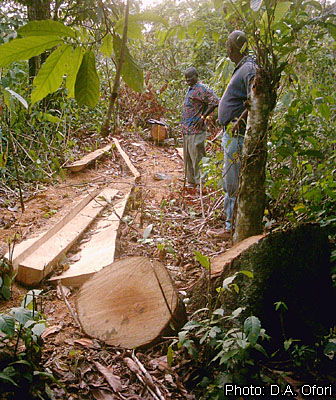 The double challenges posed by the financial crisis and climate change are highlighting the need for bolstered forest management and stepped-up investments in science and technology, the Food and Agriculture Organization (FAO) publication said, voicing concern that the economic downturn could lead governments to water down ambitious â€œgreenâ€ targets.

Countries in the early stages of development which suffer from institutional weaknesses struggle with forestry decisions, facing the difficult choice between short-term and long-term benefits. In the coming decades, the report said, demand worldwide for wood products and environmental services will increase, resulting in increase in the use of wood as a source of energy, although this could be attributed to the recent economic downturn.

It also stated that there is a possibility that countries may focus their energies on reversing the economic downturn, diluting their green goals and putting off decisions on climate change mitigation and adaptation, including actions on slashing emissions from deforestation.

The report pointed to opportunities stemming from the financial turmoil, such as green development to spur tree-planting and increased investments in sustainable forest management. In a related development, this yearâ€™s first round of UN climate change negotiations is gearing up to kick off later this month in Bonn, Germany.

These negotiations are expected to wrap up in December in Copenhagen, Denmark, with countries agreeing on an effective successor pact to the Kyoto Protocol on greenhouse gases whose first commitment period ends in 2012.
The two-week Bonn gathering is expected to draw more than 2,000 participants, including representatives from governments, business, industry, environmental organizations and research facilities.

â€œThe road to Copenhagen is under intensive construction and all its builders are seriously committed to its successful completionâ€, said Yvo de Boer, Executive Secretary of the UN Framework Convention on Climate Change (UNFCCC).