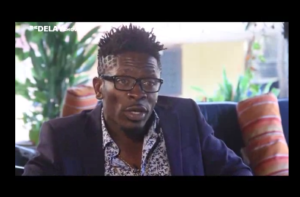 The snippet of the interview that Dancehall artiste Shatta Wale had with media personality Deloris Frimpong Manso, which was uploaded on Viasiat 1 Ghana’s Youtube account on 15 July 2016, went viral. This was due to the statements that Shatta Wale made about rapper Criss Waddle that he is gay and that his former manager Bulldog, is a dog.

His Excellency Shatta Wale spoke about a lot of things. He is a native of Nima. He even made mention of that his grandmother is from that town.

When Deloris asked him if he would talk to rapper Criss Waddle if he saw him, he said, ‘He’s gay. I’m not friends with gays. He’s not my friend’. He went on to say that he never knew that Criss Waddle is gay and that for that matter he wouldn’t have even done a music collaboration with him if he knew that earlier on. He insisted that a lot of people know that Criss Waddle is gay. #WillCrissWaddleReply? On the contrary, it was reported that he has a girlfriend in Ghana.

Furthermore, Deloris asked Shatta Wale if Stonebwoy is a competitor to him.
He replied that Stonebwoy isn’t and that he can never be one to him.

‘I see him as a bright musician who really likes entertainment but when it comes to business, he lacks a bit’, said Shatta Wale when asked what he sees when he sees Samini.

Shatta Wale disclosed that he will retire from music industry in 2020.