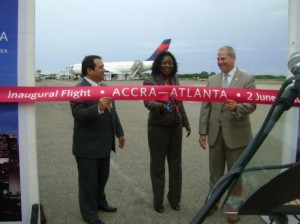 Increases choice for passengers travelling between Ghana and the Americas

â€œAs the leading U.S. airline to Ghana for more than three years, we’re delighted to be adding a second nonstop service, boosting travel and tourism between our two nations and increasing travel choice for Ghanaians with flights to two U.S. gateways,â€ said Perry Cantarutti, Delta’s senior vice president Europe, Middle East and Africa. â€œAt Atlanta, customers travelling to and from Accra will have convenient connections to more flights than any other hub in the world, to destinations across the United States â€“ including Los Angeles, Houston, San Francisco, Orlando and Washington D.C â€“ and to points throughout the Americas.â€

The new Atlanta service departs Ghana at 1 a.m., arriving into Atlanta at 8.45 a.m. on Monday, Wednesday, Thursday and Saturday, whilst the return flight leaves Atlanta at 11.15 p.m, arriving back into Accra at 2.40pm the following day. Over the summer, Delta will operate nine weekly services between Ghana and the United States, providing passengers with a wide choice of travel dates, departure and arrival times.

The Airbus A330-200 is equipped with ample cargo space, providing significant opportunities for freight forwarders and cargo shippers in Ghana.

â€œAir Freight forwarders can expect up to eight tonnes of cargo capacity per departure to Atlanta, which is a popular destination for exporters from Ghana due to the extensive same-day onward connections,â€ added Danita Waterfall-Brizzi, Delta’s regional director cargo sales. â€œCommodities include everything from local fruit and vegetables, as well as handicrafts.â€

Customers on the flight will have the opportunity to experience Delta’s award-winning BusinessElite service, including innovative food offerings from celebrity chef Michelle Bernstein and original wine selections chosen by Delta’s Master Sommelier Andrea Robinson. BusinessElite also features on-demand personal in-seat entertainment boasting more than 20 first-run and popular classic movies, a variety of television programs, thousands of music titles and a suite of video games. Passengers in economy will enjoy seat-back entertainment, as well as a complementary meal service and beverages.

Delta is the leading U.S. airline to Africa with service to six destinations across the continent. Delta has served Ghana since December 2006, during which time more than 250,000 passengers have flown with Delta between Ghana and the United States.

Building on its current position as the largest U.S. carrier operating flights to Africa, Delta will continue is expansion into fast growing Africa markets. As well as launching service between Accra and Atlanta, Delta will also launch nonstop service between Abuja, Nigeria and New York-JFK this summer, as well as direct service between Monrovia, Liberia and Atlanta via Accra. By the end of 2010, Delta intends to serve as many as eight African destinations from the United States including flights to Luanda, Angola, – pending U.S and foreign government approvals.