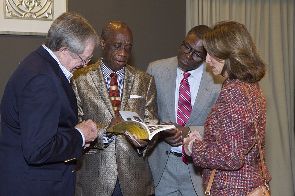 Dr. Mensah on October 20th, 2017 in Las Vegas Nevada was honored in a ceremony by former governor Robert Frank list and business leaders in the area. The ceremony was organized by Dr. Nana Kufuor MD, one of the founders of the Ghana Association in Las Vegas (GALV) and his wife Jenny Kufuor.

Dr. Mensah spoke about invention and development of fiber optics technology in the United States of America (USA) and his pioneering role in moving it from the laboratories to the factory floors and industries globally, an innovation which has aided the birth and revolution of social media today and further expanded the global internet platform.

Over 90% Facebook and Google traffic is transmitted over fiber optic submarine cables, which uses the ultra-high strength fiber optics technology based on the pioneering discoveries and inventions of Dr. Mensah that earned him 7 US Patents over a period of 6 years.

Dr. Mensah also discussed new technological developments, His book “Nanotechnology Commercialization” which he is editor in chief of released by John Wiley and sons and AICHE.

He envisions new cellphone and laptop batteries that can last 3days without charging using nanotechnology structures. Next generation Satellites and space vehicles can be constructed using nanotechnology. He continues to push the envelope in the internet of things (IoT) platforms.

At the event he demonstrated a piece of work based on, a new smartwatch which can control home appliances and change television channels using hand gestures which is commercialized by his company Hug Innovations based in silicon valley.

His autobiography “The Right Stuff Comes in black Too” was autographed by him and given to former Governor Bob List of Nevada and Dr. Kwabena Kufuor. The president of GALV Mr. Jojo Ndoum gave the closing remarks at the event.

Dr. Kufour and Mr Ndoum praised Dr. Mensah for turning his attention to Ghana and Africa, with his high-speed train proposal for Ghana and other countries and his airport maintenance facility for West Africa proposed to be built in Kumasi.

Ghana, “the Projects will revolutionize the transportation infrastructure in Ghana, something that is badly needed”.

Based on his love and interests in sustainable development for Ghana, Dr Mensah took the opportunity of his presence in the state of Nevada to tour the Hoover Dam located 45 minutes from Las Vegas. This Dam generates and supplies electricity to 6 states including California, Nevada, Arizona and Utah. This is one of the largest engineering structures in the world as well as one of the largest power generating Dams.

Over 10% of the audiences in attendance at the event were old students of Adisadel College located in Cape Coast, Ghana, which also happens to be where Dr. Mensah had his secondary education.

Dr. Thomas Mensah will be coming to Ghana to deliver the 10th R. P. Bafour Lecture Series at Kwame Nkrumah University science and technology (KNUST) from the 20th November this year in Kumasi.

Where he will focus on renewable energy and electric power generation as well as speak on the topic of 21st century infrastructure development in Ghana, expansion of the internet platform, and advanced transportation system.