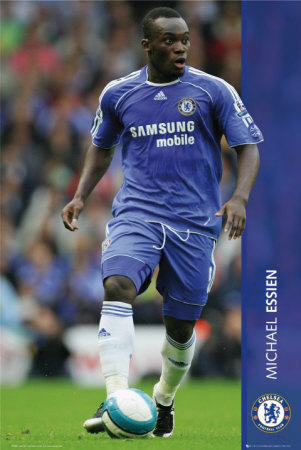 The former BBC African Footballer of the Year was talking ahead of Ghana’s 2010 World Cup qualifier against Benin on Sunday in Kumasi. “There is more pressure playing for Ghana than Chelsea, there is no doubt about that,” he admitted.

Mali and Sudan are the other teams Ghana will play with only the group winners qualifying for the World Cup. “Ghanaians love football so much that when we do not win we get ourselves into trouble, but I am always happy to serve my country in a sport that opened so many doors for me,” confessed Essien.

“It is difficult to describe the pride one feels when putting on the national jersey because Ghana has so many footballers and I am among the few who have been chosen.

“This makes me want to die when I play for Ghana because it is a cause worth fighting for. It is the only way I can pay my country back for giving me the opportunity to represent them.”

Essien recently returned to action after recovering from a knee injury sustained during a World Cup qualifier against Libya in Tripoli last September.

“All Ghanaians will thank God that one of the best footballers in the world has returned to our fold. This is something we have been praying for,” said Appiah.

“He is one player Ghana needs – most especially our technical team – as we prepare to launch the final phase of our qualifying campaign for the 2010 World Cup.

“Michael can turn things round when they are really difficult on the pitch and his presence in our squad will boost the morale of the players, technical team and supporters.”