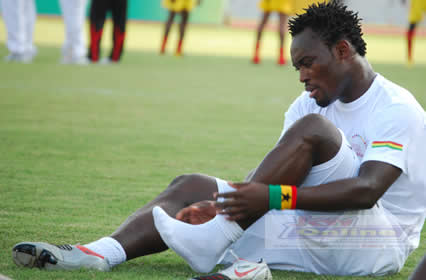 Michael Essien has ruled himself out of Ghana’s next Africa Cup of Nations qualifier and a friendly with England.

Coach Goran Stevanovic had hoped Essien would return to the Black Stars squad after more than a year’s absence.

But the Chelsea midfielder says the time is not yet right for him to come back to the national team.

“I told him [Stevanovic] I will definitely return to the Ghana squad but we didn’t talk about dates,” Essien said on his personal website.

Essien has not played for Ghana since a forty-five minute appearance at the 2010 Nations Cup.

An injury later on in training kept him out for a almost a year before he decided to take a break from international football.

He has been a regular starter for Chelsea during the current English Premier League season.

Ghanaian football officials, including the chairman of the Ghana FA Kwesi Nyantyki, had indicated that Essien was preparing to make his return.

“I didn’t tell [Stevanovic] I was available to play in March, I am not sure where those stories came from,” Essien said.

“When I decided to take a break I knew some Ghanaians would be disappointed but I felt at the time it was the right decision after two horrible injuries.

“Hopefully when I come back into the Ghanaian team the break will be beneficial for the Ghana team and for me.

“I don’t want Ghanaians to believe these stories and then in March be disappointed that I am not in the team. I will definitely return to the team at some point in the future however it won’t be for the upcoming games.”

Ghana lead Group I of Nations Cup qualifying and are due to play Congo-Brazzaville on 26 March.

They then travel to England and play a friendly at Wembley on 29 March.