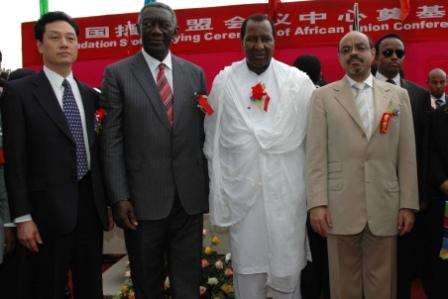 Former President John Agyekum Kufuor is expected to leave Accra Saturday evening for Khartoum, Sudan, as the head of a 51-member high-powered delegation of the African Union (AU), to observe and monitor general elections in that country scheduled for 11th â€“ 13th April 2010.

A statement signed by Frank Agyekum, Spokesperson of former President Kufuor, said Mr Kufuor is leading the delegation at the invitation of the AU.

The delegation is made up of representatives of the Panâ€“African Parliament including Edward Doe Adjaho, First Deputy Speaker of Ghana’s Parliament. It is also made up of Electoral Management Bodies from across the continent, Civil Society Organizations and African Human Rights Organizations.

The AU mission will join other electoral monitoring and observer teams from the United States, the European Union and China.

The elections to choose a President and Members of the Sudan National Assembly, brings to an end the transitional period which began when the decades-long Second Sudanese Civil War ended in 2005.

The AU team is to make an independent and impartial observation of the electoral process in line with the Union’s guidelines on election observation.

They will among others determine whether conditions existed for voters to freely express their will and evaluate the level of fair and equitable access to the media by the contending political parties.

From Khartoum, President Kufuor will go to San Francisco, in the US, as Chair of the Governing Council of Interpeace, the global peace organization, to attend the Ninth Annual Global Philanthropic Forum.

The Forum brings together about 500 leading philanthropic organizations from the across the world engaged in international development and humanitarian causes.

During the meeting, former President Kufuor will have a live television conversation to be beamed across the world with Mrs Loiuse Arbour, Country Representative of the International Crises Group and former United Nations High Commissioner for Human Rights.

Former President Kufuor is expected back by the end April, 2010.