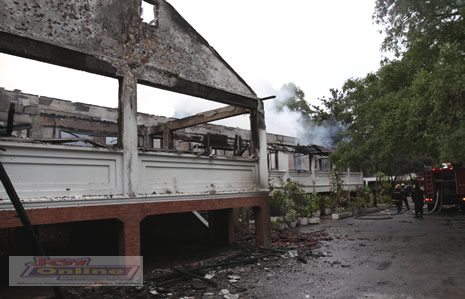 The residence of former president Jerry Rawlings at Ridge, Accra, has been razed down completely by fire.

The entire house is gone completely, and according to Kofi Adams, aide to the former president, nothing whatsoever was salvaged from the house.

President J.E.A. Mills and Vice President John Mahama have visited the former president and family to share their loss.

According to Joy News’ Seth Kwame Boateng, the fire may have started around 4:00am. About five fire tenders were engaged in fighting the blaze while scores of military and police personnel cordoned off the area.

There are suggestions the fire may have started from the family’s living room but it is unclear what started it.

Former First Lady, Nana Konadu Rawlings and one of her daughters, Yaa Asantewaa, who were in the house, escaped unhurt while the former president Rawlings, was also not in the house.

He was reported to have travelled over the weekend to Wume, near Sogakope in the Volta Region where he was involved with an ongoing project to treat residents for various eye ailments at the Sogakope Comboni Hospital. 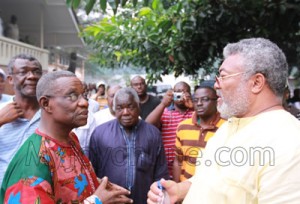 A number of other high-ranking government officials have arrived at the residence. They include the Chief of Staff, Accra Regional Police Commander, MP and Minister of State at the Presidency, Afotey Agbo and the Minister of Defence.

According to Kofi Adams, alternative accommodation is being sought for the former first couple.