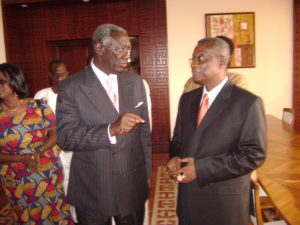 Former President John Agyekum Kufuor has hailed the commitment of President John Evans Atta Mills to invest in the education of the youth and said that would guarantee the country’s future.Commenting on President Mills’s address to a parade of schoolchildren to mark the 53rd independence anniversary in which the President had assured the nation that the government would motivate teachers and provide the necessary condition to improve teaching and learning, former resident Kufuor said investing in children could “guarantee a responsible and brighter future for the country”.He stressed that the country’s generation chain would be strengthened if it invested in youth development.President Kufuor, who was accompanied by his wife, Theresa, described the attendance and the parade by the schoolchildren as “impressive”. Â Also present at the parade was the former Vice-President, Alhaji Aliu Mahama.Alhaji Mahama indicated that the nation would have a secure future if the youth were given the requisite skills.He said the splendid conduct of the parade by the children attested to the fact that they could do well in various fields of endeavour if given the necessary support.Â Meanwhile, religious and political leaders and the youth have described President Mills’s assurance of supporting the education of the youth as a step in the right direction.The Moderator of the Presbyterian Church of Ghana and Chairman of the Christian Council of Ghana, the Rt Rev Drâ€¢ Yaw Frimpong-Manso, said the President’s focus on the youth was very crucial, since “development cannot be complete without investing in the youth”.He said there was the need for the youth to be educated to appreciate Ghana’s rich heritage and cultural identity.That, the Rt Rev Dr Frimpong-Manso said, would make the youth patriotic and responsible and enable them to cherish the country’s cultural values.He urged Ghanaians to get united and â€œsee one another as one people with a common destiny”.Â The Most Rev Prof Emmanuel Asante of the Methodist Church of Ghana stressed that investing in children’s education was the only way to secure the country’s future.The Administrative Manager of the Office of the National Chief Imam, Alhaji Adam Musah Abubakar, said any nation that supported the education of the youth had a secure future.Â The General Secretary of the People’s National Convention (PNC), Mr Bernard Mornah, said the youth were the future leaders of the country, hence the need for the government to give them quality education.He said both the government and teachers had a role in the education of the youth and, therefore, called for collaboration between the government and parents to promote education.Â He asked the government to give meaning to the promise to invest in the education of the youth by providing the necessary school infrastructure and motivating teachers to give of their best.He again asked the government to create employment avenues for the teeming youth in the country.The Member of Parliament (MP) for Jomoro, Ms Samia Nkrumah, said although Ghana had attained political independence, it was yet to achieve “economic self-reliance”.She said investing in education was the core policy of the Convention People’s Party (CPP), adding that supporting the manpower development of the country was the only way in which the country could attain economic independence.The Minister of Employment and Social Welfare, Mr E.T. Mensah, indicated that the President’s message was timely, as the country was in need of human capital to propel its socio-economic development.He said what was significant was for the country’s educational institutions to equip the youth with the relevant skills for the job market.Â Mr Mensah asked the media to play a lead role in supporting the government’s effort at building the capacity of the youth. .Master Kpormegbe Senanu Apetsi and Ms Akosua Dufie Nyamekye, both winners of this year’s President’s Special Independence Anniversary Awards, said they were happy with government’s assurance to support their education.They said given the needed encouragement the youth could unearth their potential and become responsible adults.