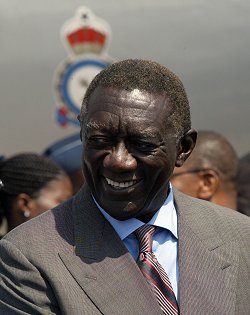 Former President John Agyekum Kufuor arrived back home Saturday morning from a two-week visit abroad that that saw him become the latest member of the prestigious Club of Madrid. His visits took him to Spain, Nigeria, Ethiopia, Kenya and Italy. According to a statement signed by Mr. Frank Agyekum, Spokesperson of the former President, Mr. Kufuor was also honoured with another honorary doctorate degree.

“In Madrid, Spain, former President Kufuor together with former Presidents Festus Mogae of Botswana, Olusegun Obassanjo of Nigeria and Ferenc Madl of Hungary became the newest members of the world’s largest forum of democratically elected former heads of state who stepped down in accordance with their terms of office.”

In Nigeria, former President Kufuor together with former US Ambassador to the UN, Andrew Young, were awarded Honorary Doctorate degrees by the Bells University of Technology in the state of Ota.

The statement said Former President Kufuor’s award was in recognition of his role in the promotion of good governance and dedicated service to Africa.

“In Nigeria, he also addressed the annual meeting of the Nigeria-Britain Business Association, on West Africa Trade Relations with Britain, as guest speaker.”

Former president Kufuor was chairman at the second summit of the Association of First Ladies of the Non-Aligned Movement which took place in Rome. The club is currently headed by Mrs. Suzanne Mubarak, First Lady of Egypt.

In Kenya and Ethiopia, Mr. Kufuor was on assignment for the United Nations World Food Programme in his capacity as Global Ambassador on Hunger. “His trip to the two countries consisted of field trips to access the extent of the looming food crises and advice on measures to be taken to alleviate it.” The statement added. 21 Nov.09