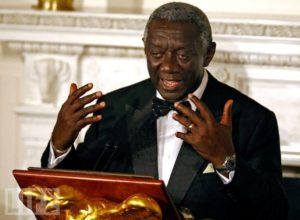 Johannesburg, Aug 12, GNA – Former President John Agyekum Kufuor has said nurturing of people to take up leadership positions in Africa was a prerequisite to the development of the continent.

“Leadership is the key to unraveling the problems of Africa. With the right leadership good policies would be enacted that will create the right condition for economic growth, respect of the rule of law and a conducive atmosphere for business to thrive,” he said.

A statement signed by his Spokesperson Mr Frank Agyekum said Former President Kufuor was speaking at the world launch of ‘Why Africa is Poor and What Africans can do about it,’ a 400-page book written by Dr Greg Mills, the Executive Director of the Brenthurst Foundation of the Oppenheimer and Son Group.

The Former President, a member of the Board of Governors of the Foundation, said a major part of Africa’s problems was because people assumed leadership positions without being adequately prepared for it and therefore lacked the vision and drive to pursue policies that would inure to the benefit of their people.

“Studies of individual historic leaders exemplified in the likes of Biblical Moses, among others, would show conclusively that each one of them had come through relevant experiences to be imbued with epochal visions of great and abiding development of their nations.”

He said the time when people just jumped into leadership positions should be by-gone. Budding leaders must bide their time and go through the apprenticeship exposures and institutions to better prepare them to assume the rightful role expected of them.

Former President Kufuor said the African Union, in pursuit of Renaissance Africa, had launched the New Partnership for the African Peer Review Mechanism to hasten the adoption of good governance and leadership throughout the continent as the vehicle to hasten development to mainstream the continent into globalization.

“I believe Africa by these acts is taking the first steps to shake off poverty and must be supported to stay the course,” he said.

‘Why Africa is Poor and What Africans Can Do About’ is in three parts: The first part examines why African states have done comparatively badly. The book concludes that the overwhelming reason why this is so is because of bad policy decisions. Correspondingly, where African states have done much better, better policy and leadership, stronger and improved democracy have gone hand in hand.

The second aspect focuses on why some countries outside of Africa have done well in terms of human development and economic growth.

Third part looks at the tremendous opportunities in Africa in terms of demographic dividend and demand for its resources.