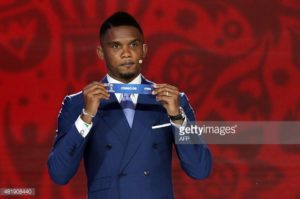 The chase by African countries for a place in the 2018 Fifa World Cup begins in October after Fifa held its draw in St Petersburg on Saturday.

The qualifying stages have been grouped into three phases with the lowest ranked countries on the continent to begin the preliminary stages from 5-13 October 2015. The winners of the first round will join the 27 countries, ranked highest in Africa in a home and away tie.

World Cup 2010 host South Africa have been handed a tough draw in the second round as they clash with Angola, while African champions Cote D’Ivoire will face the winner between Liberia and Guinea Bissau. West African giants Ghana will take on the winner between Comoros Island and Lesotho.

The winners after the second round will be paired into five groups consisting of four countries each and they will face each other in a home and away ties from October 3, 2016 to November 14, 2017, with each group winner automatically qualifying to the 2018 Fifa World Cup in Russia.

Full second round draw for Africa: