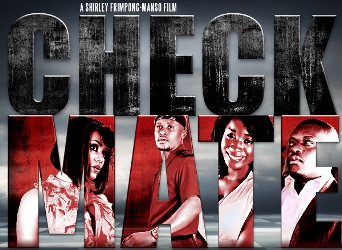 Ghanaian filmmaker, Shirley Frimpong-Manso may be saying â€˜Checkmateâ€™ in her latest production but certainly, this is not the end of her wonderful works. While her last two productions, â€˜Perfect Pictureâ€™ and â€˜A sting in a Taleâ€™ continue to receive critical and commercial acclaim she is set to dazzle audiences yet again with the thriller, â€˜Checkmateâ€™ premiering in Ghana on April 1.â€˜Checkmateâ€™ revolves around a young man, Kwame who has made all the right moves in his life; a good job, a beautiful devoted wife, an adorable child, and an impending promotion as a senior customs officer at the airport. But what seems like a typical guysâ€™ hangout on a weekend away from home in the company of his new friend and mentor, Kiki turns out to be a bad move with dire consequences for Kwame. After losing a game of Chess, he succumbs to a bet to seduce the attractive, sexy Caroline.Â The consequence of his dirty forgotten weekend later pops up threatening to destroy everything he so dearly loves. But the games only begin when he realizes that Carolineâ€™s demand for his love is nothing compared to the demands of a drug lord who will do anything to get Kwameâ€™s assistance in smuggling drugs out of the country. With his entire life hanging on a thread, Kwame must try to win the game or risk losing everything.â€˜Checkmateâ€™ promises to thrill viewers with its suspense-filled plot, clever use of audiovisuals and a gratifying interpretation of characters by an impressive cast of both new and old faces.Â It is written and directed by Shirley Frimpong-Manso, starring Nadia Buari, K.S.M, Ekow Blankson, Naa Ashorkor and introducing Senanu Gbedawo.Â It will be grand premiered at the National Theatre on April 1, 6.30pm and 9.00pm. Screening begins at Silverbird cinemas from April 2 and throughout the Easter holidays