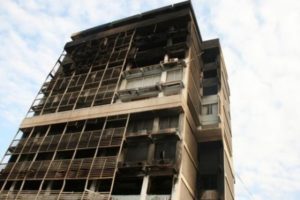 The entire building of the 10-storey Ministry of Foreign Affairs was engulfed by a blazing fire in the evening of yesterday.

By 7.30pm when the fire was at its peak, burning an assortment of office equipment on its way in the 10-storey structure, a large crowd of curious onlookers had taken position at vantage points to behold the seemingly uncontrollable destruction.

Staffers at the location, when the fire started, attempted bringing it under control but it was apparent they could not do so, and as at press time, the fire was still raging.

Fire tenders and personnel from the Ghana National Fire Service (GNFS) who raced to the place appeared to be encountering challenges reaching the tenth floor because they were not primed with the appropriate ladder and other equipment for such tasks.

The pall of smoke from the fire could be seen as far as Asylum Down and the peripheries of Nima.

The extent of damage is not known but it would certainly run into several thousands of cedis. As a standard, the GNFS would investigate the cause of the fire.

Even if they do, the required basic fighting skills required to manage such emergencies prior to the arrival of professional fire fighters are not available.

The Accra Metro Directorate of Education was also on fire a few weeks ago, destroying several properties, among them computers and other office hardware.

Ironically, the main Accra Central fire station is not far from both the Foreign Affairs building and the Metro Directorate of Education.

When the firemen arrived they could do very little because they lacked the basic equipment to fight the fire which had engulfed the building. Jet spray from their fire tenders could not reach the third floor. No casualty has yet been reported.
Source: ModernGhana