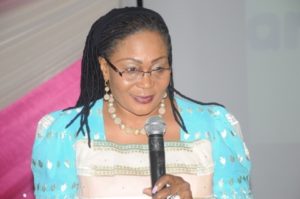 First Lady Mrs. Lordina Dramani Mahama has been elected the new President of the Organization of African First Ladies Against HIV & AIDS (OAFLA).

The election took place on Sunday at the Organization’s 15th Ordinary General Assembly in Johannesburg, South Africa. She beat four other contestants and will be sworn into office in July to replace the First Lady of Chad for a two-year term.

Mrs. Hilda Itno Derby of Chad congratulated Mrs. Mahama for her exemplary work, both in the area of HIV & AIDS and also charity work. The First Lady of Malawi who was elected Vice President pledged to assist Mrs. Mahama in all her endeavours to raise the flag of OAFLA very high.

Mrs. Mahama who is currently the Vice President for the West Africa Region of OAFLA expressed appreciation to her colleague First Ladies for the honour. She said as a founding member of OAFLA, Ghana is fully committed to the mission and vision of the organization.

“In my own work as First Lady and OAFLA representative for West Africa for the past two years, I have ensured that my priorities revolved around attaining the objectives of our strategic plan of reversing the trends of HIV and AIDS, and eliminating mother to child transmission.”

The First Lady said she would also work to execute the group’s plan to empower women and their partners as well as advocate for a comprehensive and integrated sexual and reproductive health services to reduce maternal mortality.

She pledged her commitment to continue to work towards the advancement of the health, general well-being and social protection of orphans and vulnerable children.

Today, OAFLA has more than 40 active African First Ladies as members, each leading their national chapters to undertake exemplary work in the areas of HIV & AIDS, empowering women and children.