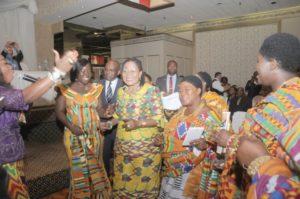 The Council of Brong Ahafo Associations of North America (COBAANA) has marked its fifth anniversary with activities to mobilize funds for educational projects in the region.

The celebration which brought together indigenes of the region in the United States of America and Canada and some traditional rulers in the region, was also used to showcase the rich Ghanaian culture to the international community.

The ceremony, intended to raise funds for educational infrastructure projects for the basic level, especially in rural communities in the region was held in Toronto, Canada, on the theme: “Changing Life through education”.

The President of COBAANA, Mr Alex Ankomah, said the initiative formed part of the objectives of the association to complement the government’s efforts in providing the needs of the region.

He explained that this year, the association chose to raise funds to support some basic schools where pupils were still studying under trees, in wooden structures and open spaces.

COBAANA was formed in May 29, 2010, in Toronto to mobilise Brong Ahafo indigenes and friends in North America to support each other, preserve the identity of Ghana and the Brong Ahafo culture and complement government’s efforts by organising annual fundraising events to support the needs in the region.

Since 2012, COBAANA has presented medical equipment and items to the Sunyani Regional Hospital.

The Brong Ahafo Regional Minister, Mr Eric Opoku, said work on the expansion and modernisation of some schools were ongoing in the region.

He explained that out of the 1,668 primary schools in the area, only 419 were in a deplorable state.

The First Lady indicated that one of the objectives of the Lordina Foundation of which she was the founder, was to change lives through education and, therefore, commended the council for its vision and commitment to the development of Ghana.

“As a nation, education must serve as a catalyst for eliminating ignorance, poverty, disease, unemployment and gender inequality. So for the future of the Ghanaian economy and our society, we need quality education for every child”, she stated.

She said it was for this reason that the government had undertaken a number of projects to expand access to education for all.