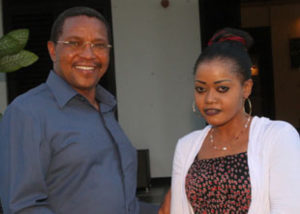 Kikwete has urged Ray C to take methadone exactly as prescribed by a physician. Ray C is currently on methadone treatment that she receives from Mwananyamala Regional Hospital in Dar es Salaam. Methadone is used most commonly to treat addiction to opioid drugs such as heroin, oxycodone.

The outlet reports that Jakaya Kikwete urged Ray C to stop abusing drugs while on methadone treatment as it would result in her breaking down. The former country chief learnt of Ray C’s alleged relapse when photos of a dejected woman reported to be Ray C were published on one of the country’s popular weeklies.

“Jakaya Kikwete (JK) read reports on a local weekly that Ray C has gone back to using drugs. He consequently sent the singer a stern message via SMS; asking her to stop abusing drugs – and that she should concentrate on taking her medicine,” a well-placed source told Amani, adding: “JK prioritises Ray C’s wellbeing.”

Ray C’s drug addiction cause was taken up by Jakaya Kikwete in 2012 after the singer’s mother appealed for help to salvage her then wasted daughter.

This was after stories on Ray C’s constant relapses into alcohol and drug addiction were spread out across newspapers and entertainment blogs in the region.

Kikwete stepped in to take up her hospital bill. Ray C and her mother were even invited to State House, Dar es Salaam to meet with the President. Ray C was elated to receive help from her head of state.

Ray C has been struggling with drug addiction; a practice she has time and again attributed to her ex-boyfriend’s bad influence.

Since Ray C quit using drugs in 2012, she has been championing an anti-drugs campaign in Tanzania.

Tanzanian media early this year claimed that the singer had fallen off the wagon, and that she has been spotted severally at drug dens consuming the health hazard.

Ray C, however, maintains that she has not lost her resolve to fully recover from drug addiction; and that the media reports are maliciously crafted to derail her recovery and taint an image she has built for herself since coming out.