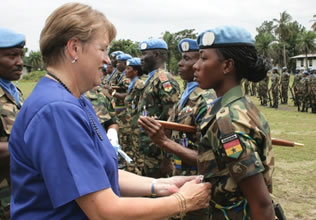 France has expressed commitment to train 12,000 peacekeepers in Africa including Ghana, to equip them with the skills to control conflicts on the Continent and beyond.

President Sarkozy, who made this known at the just ended Franco-African Summit, said the training would also enable the peacekeepers to halt crime and the high rate of piracy in Somalia and other countries in the horn of Africa.

He said France wants to remain instrumental in combating crime and terrorism after supporting former Yugoslavia, Mali and Mauritania to maintain peace and tranquillity.

President Sarkozy appealed to beneficiaries of French support to capitalise on the opportunity to reduce conflicts and warfare.

“France will keep to all her promises and we hope that you will (Africa) also plan well to take advantage of the facility to reduce the high rate of conflicts, wars and piracy inâ€¦ Africa.”

He said France was ready to share her technological expertise with African countries and appealed to the Regional leaders to strategise to be able to access the facility without acrimony and bitterness among themselves.

Dr Bingo Wa Mutharika, Chairman of the African Union expressed satisfaction about the summit, adding: “Africa needs a common voice in global warming and climate changeâ€¦ which are becoming very urgent issues for the continent and the time to act is now.”

He called on African countries to move away from resolutions to strict implementation of issues as delays had remained the bane of the continent’s development.

“We have resolved for many years, but action has been very scanty and we have to move to action and the action must be now or never.”

Madam Laurence Parisot, President of the French Employers Movement said the collaboration between African countries and France was growing stronger and there was the need to cement the relations by strengthening economic ties to generate wealth for development.

She said the association would set up an organisation of employers in Africa and France and have regular follow-up meetings that would help in the implementation of decisions for mutual benefits.

“This is Africa’s day and this is Africa’s time and we all need to fight a common cause that will give us both political and economic emancipation in our continents and countries,” She concluded.