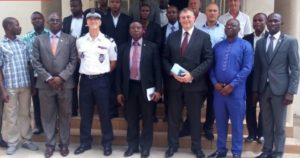 The training organized by the French Embassy and the Direction De La Corporation International (DCI) is to boost the already existing cooperation between the two countries in the fight against organized crime.

The Director General in Charge of the Criminal Investigations Department(CID), COP Prosper Kwame Agblor in an address at the ceremony, said, the sophisticated nature of organized crime demands that law enforcement officers continually engage in crime trend analysis, intelligence gathering and follow up investigations for successful prosecution of cases.

He said the fight against organized crime cannot be effective without strategic collaboration and intelligence sharing.

“It is against this backdrop that the Criminal Investigations Department had embraced the technical training offered by the French and the Direction De La Cooperation Internationale.”

COP Agblor revealed that the CID was taking steps to upgrade its detective training academy (DTA).

“This calls for training reforms and this reform will seek to integrate all the specialized courses offered by our development partners into DTA curriculum for coordination and sustainability.”

The French Ambassador to Ghana, Francois Pujolas said France will continue to support the police fight drug trafficking across the sub-region.

He said the training is to broaden the scope of the police personnel in detecting drug trafficking which is gradually gaining grounds the world over.