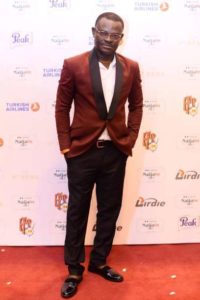 The death of the late Nigerian actor Dede One Day came as a shock to a lot of people. Peter Onwuzurike Onyehidelam, who was popularly known as Dede One Day, died on Monday 14 December, 2015, as a result of high blood pressure. He slumped while performing at an event in Aba on Sunday. He was laid to rest on 13 February, 2016.

I caught up with the legendary actor Francis Odega. I asked him how he felt after he heard the news and where he was at the time. “I felt bad. I was actually on set at Anambra State for a movie at the time.

It came as a shock to me. He was a friend and a colleague.”

Moreover, I asked him how it was like working with him. “He was a nice guy to work with. I’ve done a couple of movies with him.”

“He was a very good person. Like I always say, Dede was my friend and colleague. I don’t want to talk about his personal life. I wasn’t always around him. I was always around him whenever we were working together.”

The late Dede One Day

“Do me a favour, please, gerrarahere!”. “You know what I’m saying?”. “You know what you are? You’re an EP, enemy of progress”. “Whollop, whollop, just whollop”. “Holla!”. Those statements were made by Francis Odega in a scene from the movie Back from South which trended on social media for months in 2015. The scene captures him comically speaking in an American accent.

When I asked him why the movies Welcome To South, Agony of South and Back From South were not shot in South Africa, he said: “I’m just an actor. I’m neither a producer nor a director. They brought the script to me. We thought we were going to do it in South Africa but maybe because of some logistics problems or some challenges it wasn’t possible to shoot the movies there.”

I also asked him how it is like working with actor Ime Bishop. “He’s a very good person. He’s good but I think there is room for improvement. This applies to each and everyone of us. I can do a movie today and maybe I might think that I should have acted in a different way.”

Francis Odega is part of the judges of the Goodwill Ultimate Talent Show. GUTS is meant as a fund raising campaign to raise 1.2 billion naira to build the first school for the less privileged children in Nigeria. Foundation for the elderly and the poor has been in the forefront in helping the less privileged children to reach their potentials by enrolling them in schools or paying their school fees and this project is a continuation of that good work. Other judges include Zack Orji, Oge Okoye and Amanda Ebeye.

This is his advice to people that want start a career in the movie industry: “If you’re not trained to become a lawyer, you can’t practice law. Acting is an everyday thing. Some people think that acting is a hobby. It isn’t. It’s a profession. Some people take it as a hobby. My advice to them is to act well. Don’t call acting a hobby. It’s a profession. Believe in God Almighty. Let it come naturally. Believe in what you are doing. And let God do the rest.”

Franice Odega has been in the Nollywood movie industry since 1996. He is loved by many for his humour.

He has also been making cameo appearances in a lot of music videos.

He has been married to his wife Chibuzor for 11 years. He met her at one of his shows and she approached him, telling him that she was a huge fan of his. They then exchanged numbers and the rest is history.