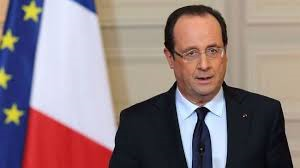 The French President François Hollande has praised Ghana for her strides in economic growth and democratic practice, saying Ghana’s achievement in those areas in Africa are worth emulating.

President Hollande said this during an interaction with Ghana’s Ambassador to France, Mrs. Johanna Odonkor Svanikier, at the Élysée presidential palace in Paris last Friday. The discussion which focused on bilateral relations between the two countries and political developments in West Africa, was held after the ambassador, who is also Ghana’s Permanent Delegate to UNESCO and the International Organisation of La Francophonie, presented her Letters of Credence to the French President at a brief colourful ceremony at the palace.

President Hollande said Ghana’s democratic credentials had earned it an enormous prestige and respect around the world, and urged the government, political parties, civil society groups and all stakeholders to continue to work together in protecting the nation’s remarkable democratic status.

He lauded Ghana’s immense contribution towards regional peace and development, as well as health and the fight against Ebola.

President Hollande commended President John Mahama for his leadership role in the sub-region, and pledged France’s renewed support and partnership with Ghana.

He commended Mrs. Svanikier on her achievement as the new ambassador to France and wished her a successful tour of duty; adding that the French government would offer her the necessary assistance and cooperation to ensure that she succeeds in strengthening the ties between the two countries.

Ambassador Svanikier thanked President Hollande for receiving her, and expressed her appreciation for the good relationship that exists between the two countries; she pledged to promote economic diplomacy in support of Ghana’s development drive.

She assured her host of her unwavering commitment to further enhance the political, economic and cultural ties between the two countries.

The new Ambassador informed President Hollande that as Chairman of ECOWAS, President John Dramani Mahama had recently visited the three Ebola afflicted countries to pledge the solidarity of member states and to deliver the much needed relief supplies. She explained further that, Ghana had become a coordinating centre for delivering relief items to the affected countries.

On governance in West Africa, she explained that President Mahama had led ECOWAS to demand compliance with the principles of democracy and constitutional governance in Burkina Faso, towards achieving peace in that country after the recent resignation of President Blaise Campaore.

Mrs. Svanikier, who was recently appointed by President Mahama, holds a Master’s Degrees in law from the London School of Economics, UK, a Masters in Public Administration from Harvard University, U.S.A. and a Masters in Political Science and International Relations Research from the University of Oxford, U.K. She was a Fulbright Scholar at Harvard University and was called to the Bar in England and Wales in 1991 and in Ghana in 1992.

She has worked as a barrister, a university lecturer and a legal and development consultant.

She is a former lecturer at the University of Ghana and a Commissioner at the National Development Planning Commission until her appointment.

She is the author of several publications including “Womens’ Rights and the Law in Ghana.”