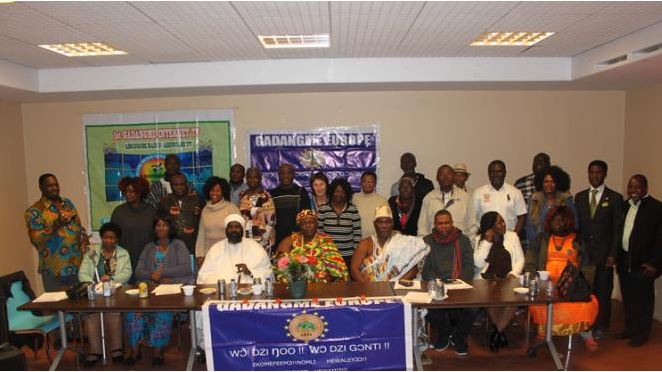 The GaDangme group in Europe met to discuss a number of issues affecting the people of Greater Accra region particularly in the area of education and cultural awareness.

In the month of October specifically 14th & 15th, GaDangme Europe met in Amsterdam, the Netherlands for its 12th Annual General Conference. In 2008 the same venue hosted the Constitutional Conference that gave formal birth to the GaDangme Europe.

In the same year 2008 GaDangme Europe planted a seed of love and care for their homeland Ghana where they came together as one people to think and brainstorm on topics/issues that will re-shape and outline Greater Accra Region of Ghana in terms of education and cultural awareness.

GaDangme Europe holds a two days conference and it was the 12th edition of this great union which took place in De Kandelaar, Bijlmerdreef 1239. In fact this year´s conference was a conference full of good memories and lots of achievements under the able leadership of Sarah Naa Adoley Coleman Hoeling.

The conference commenced on Friday morning with welcoming our chiefs from Ghana namely Nii Acquah II of Ga Odumase manste, Nii Quao Donkor II – Asere Tsoro manste Nii Osabu Abbey IV –Prampram Seitse, Mannye Naa Marmakai Bortobli I, and Nuumo Gbelenfo iii- Osu, Haastoo and Pokuase Gua Wulomo III. Rev. Kpakpo Bruce-Thompson from GaDangme community-Hamburg opened the conference with an opening prayer followed by the high priest Nuumo Gbelenfo III with a traditional prayer. It was really interesting and exciting to see how our forefathers use to pray in the past through libation pouring and also to have a real overview of it from a high priest.

This year’s conference saw the launch of GaDangme Europe “Green Book” that gives readers information of achievements and efforts made during the past two years under President Naa Adoley Coleman Hoeling.

The first day of the conference a topic was raised based on the Ga language and how intensively it has to be treated. The major problem of the people is that the Ga language is losing or mislaying its origin and its importance in with especially among Ga born children and youths which GaDangme Europe pleaded and beseeched with the chiefs and the high priest to do something concerning this issue. They came out with the advice that the GaDangme people should take a regulatory action towards the Government and its agencies such as Ministry of Education and Ghana Education Service.

The first conference ended with an introduction of the nominees for the election to stand as executives to move GaDangme Europe to another level.

On the second and last conference day of the conference, executives that will lead the GaDangme Europe were elected which was coordinated by Madam Lesley Riwar and Madam Florence Naa Shormeh Lamptey.

President Naa Adoley Coleman-Hoeling was re-elected for the second time with a popular majority vote together with her Vice-President Nii Kotey Robertson for the next two years, other elected positions such as secretary, treasurer, financial secretary and Public relation officer and its vice also got elected for the next two years, immediately after the elections, Nuumo Gbelenfo III sworn the newly elected executives and they commenced with their duties from that day.

A fund raising process took place for a single project which was represented as Food Security which will be implementing in rural parts of Gt. Accra. This project is going to help our people with better food preservation and also affordable foodstuffs in the Accra market`s as well as cultivation of crops. GaDangme Europe honored and showed appreciation to individuals who have fought and worked hard for the association.