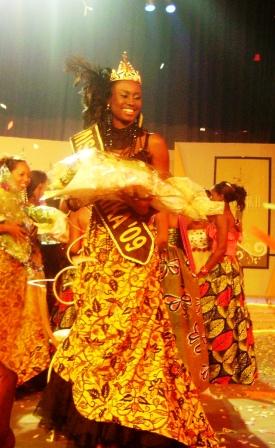 The confident and ambitious young lady stood tall in the several rounds of competition to affirm her status as a firm favourte of the reality TV beauty contest since it begun some 12 weeks ago. Among her many aspirations is to become an international; journalist and a model. She won the coveted Miss Malaika Crown, a Kia Cerato saloon car, GHÂ¢4,800 annual salary among other fantatistic prizes. As part of her role is Miss Malaika, she will work as a malaria youth ambassador with the National Malaria Control Board.

The night was filled with musical performances from Nigerian singer Wande Coal, 4×4 and Ghanaâ€™s fastest rapper, Sarkodie. In an emotional performance, Kunta Kinte of the Duo, Bradez made his first public appearance after suffering from stroke earlier this year. He came on stage in a wheelchair and caught up to rap his verse from the groupâ€™s hit song, â€˜Simpleâ€™ and was carried back stage afterwards in his wheelchair. He is recovering from the stroke with clear signs of paralysis in his limbs. The crowd gave him a resounding applause for his efforts on the stage. Miss Malaika will return next year with a new set of ladies and excitement in Season 8.