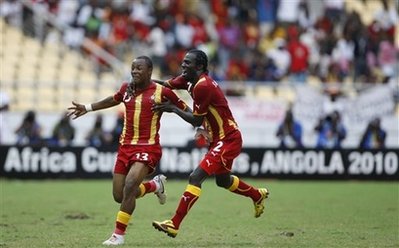 LUANDA, Angola â€” World Cup qualifier Ghana beat 10-man Burkina Faso 1-0 on Tuesday to advance to the African Cup of Nations quarterfinals.Andre Ayew’s header in the 30th minute was enough to set up a match against Angola in the knockout round.Ghana finished with three points after two games, one behind Ivory Coast. Burkina Faso finished with one point. Togo withdrew from the tournament after an armed attack on the team bus killed two members of its delegation.Ghana, a four-time tournament winner, will play Angola Sunday in Luanda. Group winner Ivory Coast will stay in Cabinda for its quarterfinal against fellow World Cup qualifier Algeria.