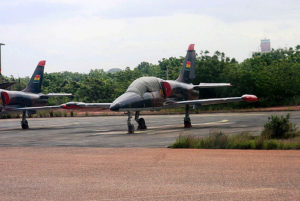 GHANA NEWS – Lieutenant General Joseph Henry Smith (Rtd), Minister of Defence, on Friday commended the Ghana Air Force (GAF) for maintaining the vision for its establishment despite the many challenges facing it.

“I doff off my hat to the Ghana Air Force for continuing to stay in the air in the face of the numerous shortfalls in the provision of modern platforms and woefully inadequate spares backing for the ageing fleet,” he said.

Launching the Golden Jubilee anniversary celebration of GAF in Accra, Lt-Gen Smith said: “Ghana Air Force has delivered, not only at the operational front but in support of national development objectives with commendable results.”

The celebration is under the theme: “Commitment to the Delivery of Air Power to Meet National Security Objectives.”

Activities for the month-long celebration include a raffle draw with a Kia Picanto saloon car as the ultimate prize.

Lt-Gen. Smith said Ghana’s First President Dr. Kwame Nkrumah’s vision for the GAF was to provide an image of Ghana as an emerging sovereign nation capable of handling her own affairs.

“GAF has improved from a humble beginning of a flying training school to a fully fledged air force rendering invaluable services to meet national objectives,” he added.

On its operations, he said GAF had flown Ghana’s flag since the 1960’s with Ghanaian troops in the Congo crisis, Liberian conflict and the current aviation support to the United Nations in La Cote d’Ivoire.

Lt-Gen. said GAF had won many international laurels while it has locally supported the Navy in numerous joint exercises with considerable success.

He noted that the highly technical nature of the GAF demanded huge budgetary support that could hardly be met by developing economies like Ghana.

However, Lt-Gen. Smith said the acquisition of various categories of platforms ranging from fixed wing to rotary wing air crafts was far advanced and government was determined to improve the manpower and training needs of the service.

He said the flying training school at Takoradi which had not been functioning for sometime now currently undertake courses for personnel from the Ghana Civil Aviation Authority (GCAA) and the Aeronautical Engineering Faculty of Kwame Nkrumah University of Science and Technology (KNUST) in Kumasi.

He said with the oil find, GAF had an important role of providing the capabilities needed to secure such an important national asset.

The GAF and Ghana Navy were established in 1959 by Ghana’s First President Osagyefo Dr. Kwame Nkrumah.