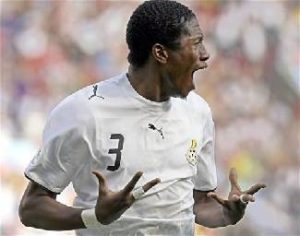 DUBAI, United Arab Emirates (AP) â€” Ghana was held to 0-0 by Saudi Arabia despite dominating possession in the friendly on Wednesday.

Seven of the Ghana side featured in the World Cup quarterfinal against Uruguay at the World Cup but they could not capitalize on long spells of possession.

Asamoah Gyan was deployed as a lone striker by the Ghanaians but couldn’t reproduce the form that has seen him score four goals in three games for Sunderland in the English Premier League.

Ghana came closest to breaking the deadlock shortly before halftime when a rare Gyan shot was tipped over the crossbar by Walid Abdullah.

The intensity of the match grew in the second half, but several rash challenges forced the spectacle to peter out.