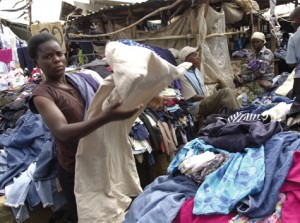 Market traders in Ghana will be banned from selling second-hand underwear from next February, trade regulators say.

According to the Ghana Standards Board, used pants – and other second-hand goods like handkerchiefs and mattresses – are unhygienic and could pose a health hazard.

The importation of these items was banned in 1994 but never implemented.

Some traders in a market in the capital, Accra, told the BBC they were unhappy the move might affect business.

The BBC’s David Amanor in the city says there is a lot of consumer demand for second-hand clothing, often imported from Europe, as it is cheaper than locally produced items.

It is the same in many African countries.

“Ghana is a third world country; we’ve been doing this all along, so why are they talking about a ban now?” Millicent, a trader in Kantamanto Market in central Accra, told the BBC’s Network Africa programme.

“The authorities should think again because our livelihoods are at stake.”

“Second-hand underwear and other clothes we sell here at Kantamanto Market are better quality than new undies in the stores,” she said.

She admitted that some of the imported underwear was stained but said customers rummage through the piles and inspect goods before buying.

“No matter how poor the person is, they will not chose stained ones and we throw them away,” she said.

One trader insisted that all the goods she sold had been disinfected.

Our reporter says second-hand clothing is often referred to as “obroni wewu”, which literally translates as “white man’s deads”.

Some customers also seemed dismayed by the news of the forthcoming ban, he says.

“I’ve been wearing ‘obroni wewu’ all my life from infancy – all the clothes you see on me today from up to down are ‘obroni wewu’ – and I never fell sick because of used clothes,” says Doris, a shopper at Kantamanto Market.

The Ghana Standards Board has re-iterated that it is not all used clothes that are banned.

It says an education campaign is under way to ensure that dealers in second-hand comply with the law before the ban comes into effect.