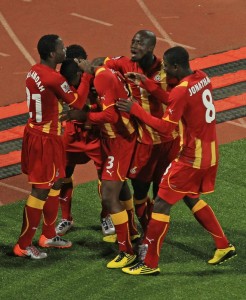 Accra, Feb. 2, GNA – Ghana’s Black Stars have dislodged African champions, Egypt to become the latest best ranked team on the continent. The Stars gained 16 points to move to the 15th position on the globe up their previous 908 points at 16th position, according to the latest ranking released Wednesday by world soccer governing body, Federation of International Football Associations (FIFA) culled by GNA Sports in Accra.

Ghana increased its points haul to 924 points to assume the top spot of the continental rankings, but their latest position is a place behind their all-time best 14th position on the FIFA table after the Nations Cup exploits in 2008.

Egypt now third in Africa dropped 23 places to place 33rd in the world, whilst Cote d’Ivoire leapfrogged to the second place on the continent despite also losing five points.

Greece are the latest entrants in the global top 10, assuming the spot previously held by Egypt.