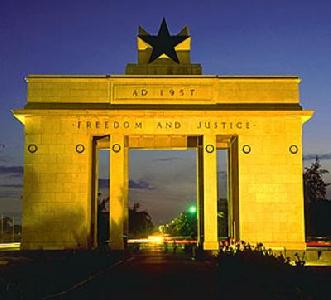 As Ghana celebrates 53 years of Independence this Saturday, the ambassador to the United States is hailing the strong bilateral relations between Accra and Washington.Ambassador Daniel Ohene Agyekum said Ghana is serving as a shining example envisioned by the founding fathers to all of Africa with its embrace of the true tenets of democracy.â€œWe will be celebrating 53 years of our independence, and this marks quite an important milestone in our history. It is important because Ghana is now at the crossroads of building a society that is democratic and in which each and every individual member of the society is encouraged to play a role,â€ he saidLed by first President Osagyefo Kwame Nkrumah and the other founding fathers, the then-Gold Coast attained its independence from Britain on 6 March 1957, becoming the first black African country south of the Sahara to do so. The name Ghana (warrior king) was legally adopted shortly after independence. Ambassador Agyekum expressed gratitude to the countries that have supported Ghanaâ€™s efforts to strengthen its democratic institutions.â€œAs we celebrate this occasion, we are encouraged by the support that we have received from many friendly countries including the United States of America, where I represent the interest of the government and the people of Ghana. It is important because for the relationship of the U.S and Ghana, we have enjoyed tremendous partnership, a partnership that has enabled us to grow our economy, our infrastructure, and I am saying these in all sincerity,â€ Agyekum said.On his first official visit to a sub-Saharan African country last year, President Barack Obama said in a speech to Ghanaâ€™s parliament that â€œthe people of Ghana have worked hard to put democracy on a firmer footing, with peaceful transfers of power, even in the wake of closely contested elections. And with improved governance and an emerging civil society, Ghana’s economy has shown impressive rates of growth,â€ Obama said.Ambassador Agyekum said President Obamaâ€™s visit to Ghana significantly strengthened the countriesâ€™ bilateral relations. â€œThe visit of President Obama did greatly enhance this friendshipâ€¦We can look into the future with optimism and faith, and of course the people of Ghana and our government are extremely grateful for the hand of friendship that the U.S and the support that the people of the United States have extended to the Ghana government and the people of Ghana,â€ Agyekum said. Shortly after independence, President Nkrumah said Ghanaâ€™s independence was meaningless unless it was linked to the liberation of the entire African continent. Political observers say Ghanaâ€™s independence was a catalyst for many African nations to demand their freedoms from their colonial masters.