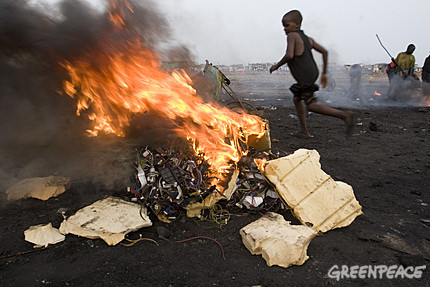 â€œThis is supposed to be going to China, but it isnâ€™t going anywhere,â€ said Arno Vink, an inspector from the Dutch environment ministry who impounded the container because of Europeâ€™s strict new laws that place restrictions on all types of waste exports, from dirty pipes to broken computers to household trash. Exporting waste illegally to poor countries has become a vast and growing international business, as companies try to minimize the costs of new environmental laws, like those here, that tax waste or require that it be recycled or otherwise disposed of in an environmentally responsible way. Rotterdam, the busiest port in Europe, has unwittingly become Europeâ€™s main external garbage chute, a gateway for trash bound for places like China, Indonesia, India and Africa. There, electronic waste and construction debris containing toxic chemicals are often dismantled by children at great cost to their health. Other garbage that is supposed to be recycled according to European law may be simply burned or left to rot, polluting air and water and releasing the heat-trapping gases linked to global warming.

While much of the international waste trade is legal, sent to qualified overseas recyclers, a big chunk is not. For a price, underground traders make Europeâ€™s waste disappear overseas.

After Europe first mandated recycling electronics like televisions and computers, two to three tons of electronic waste was turned in last year, far less than the seven tons anticipated. Much of the rest was probably exported illegally, according to the European Environment Agency.

Paper, plastic and metal trash exported from Europe rose tenfold from 1995 to 2007, the agency says, with 20 million containers of waste now shipped each year either legally or illegally. Half of that passes through this huge port, where trucks and ships exchange goods around the clock.

In the United States, more states are passing laws that require the recycling of goods, especially electronics. But because the United States places fewer restrictions on trash exports and monitors them far less than Europe, that increasing volume is flowing relatively freely overseas, mostly legally, experts say. Up to 100 containers of waste from the United States and Canada arrive each day, according to environmental groups and local authorities in Hong Kong. â€œNow we are collecting far more, but they canâ€™t prevent it from going offshore. People talk about â€˜leakage,â€™ but itâ€™s really a hemorrhage,â€ said Jim Puckett, director of the Basel Action Network, a Seattle-based environmental nonprofit that tracks waste exported from the United States.

The temptation to export waste is great because recycling properly at home is expensive: Because of Europeâ€™s new environmental laws, it is four times as expensive to incinerate trash in the Netherlands as to put it â€” illegally â€” on a boat to China. And the vast container ships that arrive in Europe and North America from Asia filled with cheap garments and electrical goods now have a profitable return cargo: garbage like steel cables, circuit boards and leftovers from last nightâ€™s pasta meal.

â€œThe traffic in waste exports has become enormous,â€ said Christian Fischer, chief consultant on waste to the European Environment Agency, which released its first study on the topic this year, â€œbut we need much better information about it.â€

The Dutch have taken a lonely lead in inspecting waste exports and curbing the traffic, providing a rare window into the trade. They estimate that 16 percent of the exports are illegal. But in most ports where customs inspectors typically check imports far more thoroughly than exports, much probably passes through unnoticed.

In July, a shipment of 1,400 metric tons of British household garbage that was illegally sent to South America â€” labeled as clean plastic for recycling â€” was apprehended only after it landed in Brazil.

Rotterdam uses X-rays and computer analysis of shipping documents to pick out suspicious containers. But other countries need to do more, said Albert Klingenberg of the Dutch environment ministry, adding: â€œWhen they canâ€™t get it out in Rotterdam, they go to Antwerp or Hamburg.â€

The regulations also prohibit exporting waste to poorer parts of the world unless the receiving country accepts that kind of waste and it is going to a certified recycler. The guidelines fully ban the export of certain hazardous materials and so-called â€œproblematicâ€ waste, defined as waste that is not amenable to recycling and so would be harmful to the environment at its destination, for example, waste that is soggy or mixed household garbage. The European laws generally follow the guidelines of the 1992 Basel Convention, the treaty that regulates dangerous exports of waste, and a proposed 1998 amendment.

The United States, during the Bush administration, was one of the few countries that did not ratify the convention. And much of the trash trade banned by Europe is still legal in the United States, where laws focus on only the most hazardous waste.

That may change. A State Department official, who insisted on anonymity because the new administration had not formally reviewed its policy, said, â€œWeâ€™ll be grappling with that in this administration.â€

Some types of waste exports are environmentally sound, experts say. If products and packaging used in Europe are manufactured in Asia it may make sense to ship them back for recycling. The waste trade â€” legal and illegal â€” is partly propelled by the fact that fast-growing economies like Chinaâ€™s and Indiaâ€™s need the raw material. From Rotterdam, paper, plastic and metals tend to be sent to China. Electronic waste tends to go to African countries, in particular Ghana, Egypt and Nigeria.

But companies in Africa and Asia are â€œhighly variableâ€ in their recycling capabilities, dependability and safety records, said Mr. Fischer, the consultant to the environment agency.

In Rotterdam, inspectors uncover endless ploys to subvert the system: Containers are packed with legal goods in front to hide illegal material. TVs and computers are labeled as secondhand goods, which can be legally shipped, even though they are destined for dismantling.

Despite fines of up to $22,000, traffickers feel it is worth the risk to send trash abroad, although repeat violations can lead to criminal prosecution. Last year, the Dutch returned 80 illegal shipments to their countries of origin, their usual policy. But that is not always possible.

In one case, inspectors seized an American container carrying old paint cans and other material to Nigeria. They could not send it back, because the United States is not a party to the Basel Convention. Anyway, the hazardous contents were leaking, and the Dutch were left to dispose of them properly.