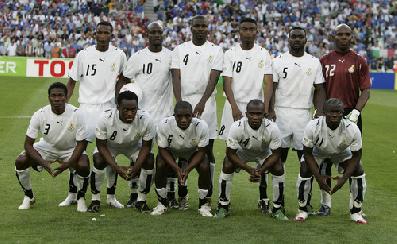 Accra, May 30, GNA – Ghana’s head coach Milovan Rajevac has announced his final 23-man squad for the South Africa 2010 soccer fiesta. According to information gathered by GNA Sports from Ghanafa.org, Kevin-Prince Boateng has made it into the final 23-man squad. The 23 year-old mid-field attacker is yet to be capped for Ghana after securing his nationality switch from Germany.

Rajevac is said to have confirmed his decision on Sunday at Ghana’s training camp in Paris ahead of the Black Stars’ departure to Rotterdam tomorrow for the friendly against Holland on June 1.

Six players from the squad made up goalkeeper Stephen Adams, Eric Addo, Emmanuel Agyemang-Badu, Laryea Kingston, Haminu Draman and Bernard Kumordzi all were all dropped by the Serbian coach.
Ghana will play against Serbia, Australia and Germany in Group D at the World Cup that kick starts on June 11 to July 11.