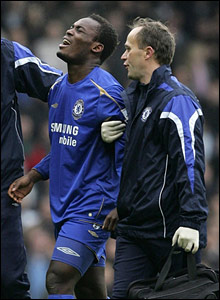 Ghana coach Milovan Rajevac has urged his squad to lift up their spirits as he looks to putting the bad news of Michael Essien’s absence from the World Cup behind him as quickly as possible.

Essien was on Thursday ruled out of the World Cup finals in South Africa after failing to recover from a knee injury following a review of his condition by medical experts from the Ghana Football Association and Chelsea Football Club.

Though Rajevac had this week talked up the qualities that the 27 year-old midfielder brings to his Ghana team, he has finally allowed realisation sink in that Essien will not represent the Black Stars at the World Cup nevertheless with disappointment.

â€œI am really disappointed that Michael Essien will not be at the World Cup for Ghana as a player,â€ a distraught Rajevac said to www.ghanafa.org after the meeting involving the medical teams from the FA and Chelsea and Essien.

â€œHe is an important player on and off the field but we can’t use him this time. Essien brings lots of advantages; he brings so many things to the team and always gives us options.â€

But, with Essien ruled out, Rajevac is concentrating on preparing his squad in the best possible way for tournament with a call on his players to show a united front.

â€œIt’s most unfortunate. But I hope and believe that the other players would give off their best,â€ he said.

â€œWe want to achieve with this team and must work hard. We will focus on the task ahead and hope we have a good World Cup. I hope the past experiences with injuries, though unfortunate will help us stay united and fight for each other.â€

Ghana have been drawn in Group D alongside Australia, Germany and Serbia.

The Black Stars will open their campaign at the World Cup against Serbia on June 13 but have two friendly games lined up against Holland on June 1 and a June 5 game with Latvia before setting off to South Africa.