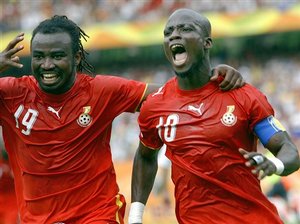 Ghana did not quite get the Group of Death but it sure feels like one with three-time World Cup champions Germany, Asian powerhouses Australia and European heavyweights Serbia making up their opponents.

Ghana, at 37th, is the lowest ranked nation in the group. The Serbs are currently ranked 20th in the world, one place ahead of Australia, while Germany, is 6th.

The Black Stars opening match at the 2010 World Cup will be against the homeland of coach Milovan Rajevac, Serbia, in Tshwane/Pretoria, on June 13.

Milo’s men will then be up against Australia in Rustenburg on June 19 and Germany on June 23 in Johannesburg.

These are the groups:

Group A – South Africa, Mexico, Uruguay, France. (France is favorite only on paper and qualified by a handball; Mexico is tough anywhere, Uruguay unpredictable and South Africa the home team, which makes it hell for everybody else. Anything can happen here, but it’s far from being ‘the Group of Death’).

Group B – Argentina, South Korea, Greece, Nigeria (My prediction: Nigeria and Argentina qualify, in that order… unless Messi wakes up and takes Argentina to the top).

Group C – England, USA, Algeria, Slovenia (England and USA, in that order but watch for the Algerians)

Group D – Germany, Australia, Ghana, Serbia (This is a tougher group than it seems; I go with Germany on top, followed by Ghana, but don’t dismiss Australia).

Group G – Brazil, North Korea, Portugal, Ivory Coast (Brazil and Ivory Coast, unless Ronaldo delivers and takes Portugal to the next round)

Group H – Spain, Honduras, Chile, Switzerland (Spain should win it, but Chile has a great team and Switzerland has improved a lot; I don’t think Honduras has enough in this group)

The World Cup begins on June 11, 2010 with South Africa playing Mexico in the opening game.