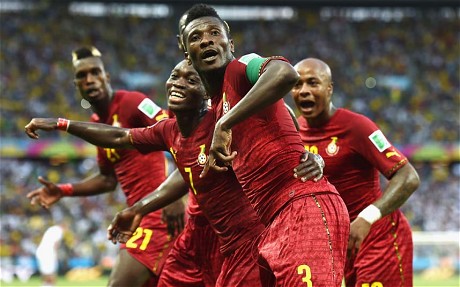 The Ghana FA rubbished claims by an English newspaper that it agreed to play in international matches that others were prepared to rig insisting that it has reported the men at the centre of the affair to the Ghana police and FIFA.

An undercover investigation by The Telegraph and Channel Four’s Dispatches programme claims the GFA agreed to take part in international football matches organised by match fixers.

Christopher Forsythe, a registered Fifa agent, along with Obed Nketiah, a club official in Ghana, were secretly recorded boasting that they could employ corrupt officials who would rig matches played by Ghana.

The two men have been reported to the Ghana Police while the GFA has informed FIFA and CAF about the report which was published by the newspaper on Sunday night.

The Ghana FA’s full response to the allegations were not published by the newspaper only reserving just one paragraph as the GFA’s response by paraphrasing.

Reporters from The Telegraph and a former Fifa investigator claimed they represented an investment company that wanted to “sponsor” games.

The president of the country’s FA then met the undercover reporter and investigator, along with Mr Forsythe and Mr Nketiah, who were proposing to organise matches for the Black Stars before they were asked to submit a draft proposal.

Even before the GFA had responded to the proposal whether to accept or decline it, the Daily Tepegraph concluded that the GFA had agreed to the deal.

The draft contract stated that it would cost $170,000 (£100,000) for each match organised by the fixers involving the Ghanaian team, and would allow a bogus investment firm ?to appoint match officials, in breach of Fifa rules.

But the GFA rejected the claims of the newspaper saying that its full response to the letter to the Daily Telegraph was not published by the paper as it is meant for them to exact maximum publicity in the wake of Ghana’s excellent showing at the World Cup.

“We wish to state categorically that the Ghana Football Association (GFA) or its President Mr Kwesi Nyantakyi never approved or gave Diamond Capital Management the consent to go ahead and organise friendly matches for the Black Stars,” the statement from the GFA to the Daily Telegraph which was not published by the UK newspaper read.

“Messrs Forsythe only submitted a draft contract which shows that what they had proposed has not been accepted, signed, sealed or approved as we had not signed or approved anything for Diamond Capital Management to go ahead to organise matches for the Black Stars.

“What Mr Nyantakyi later received from them were promptings and reminders to sign and return the contract to them. Mr Nyantakyi told them there were governance issues involved that needed to be cleared by our Legal Committee before the GFA could sign.”

When they were confronted about their operation, both Mr Forsythe and Mr Nketiah denied any involvement in a plot to fix matches. Mr Nketiah said: “These are false allegations and I will never in my life do such a thing.”

As part of a statement, Mr Forsythe, said: “To be frank everything I told you about the match fixing was a figment of my own imagination because I am so naive that I don’t even know how matches are done. They were promises just to be able to get something off you.”