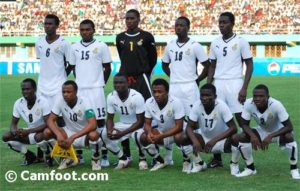 Ghana’s Black Satellites are in upbeat mood following their 2-1 win over Uzbekistan at the U-20 World Cup on Saturday.

However their next task is to beat an England team who are licking their wounds after defeat at the hands of Uruguay.

Ghana came from a goal down to beat the Uzbeks who took the lead on at the start of the second half.

Ghana reacted and Ransford Osei drew them level on the hour.

Uzbekistan’s goalkeeper Sanjar Kuvvatov let the ball slip through his fingers as Adiyiah shot from 15 yards.

Ghana’s coach Sellas Tetteh was happy with the way his team performed but thinks there is still room for improvement.

England were defeated 1-0 by Uruguay in their first game and badly need to make amends.

Uruguay substitute Tabare Viudez scored the only goal of that game from a superb scissors kick.

Ghana currently top Group D on goal difference, but are level on points with Uruguay.