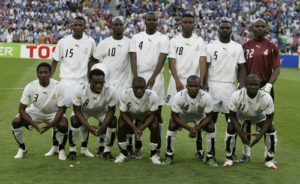 TheÂ Black StarsÂ arrived in the Angolan capital, Luanda, from their training base in South Africa before continuing their journey to Cabinda.Â Â Local Nations Cup officials were at hand to meet theÂ Black Starsdelegation while a handful of Ghanaians living in the town also turned up to welcome their favourite players.

The playersÂ were quickly deployed in their room and they will start training for the three-week tournament on Friday ahead of their first game on Monday against Burkina Faso.Â Â The major concern for journalists there was the absence of midfielder Michael Essien who is expected to join the squad by early next week and will miss the first group game.Â In brief declarations to the press theÂ headÂ coach of the Ghanaian squad, Milovan Rajevac, made light of the absence of Essien.

The Serbian manager stated that his team is strong, balanced and futuristic as it includes experienced stars and players of the world under-20 champions.Â Â The 20,000-seat Chiazi stadium will host Group B – Ghana, Ivory Coast, Burkina Faso and Togo – in the tournament. Â The Nations Cup is seen as the starter to a 2010 AfricanÂ footballfeast whose main course comes in June with the World Cup in South Africa-the first time international football’s biggest competition has ever been held on the continent.