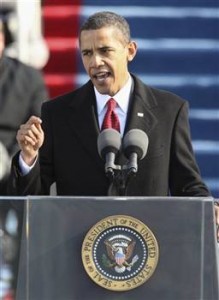 This follows President Barack Obama’s call to President John Atta-Mills to discuss the escalating narcotics trade in the West African sub-region. President Obama also reportedly praised Ghana for its democratic process at a time when he said there was growing instability across Africa with recent coups in Mauritania, Guinea and Madagascar.

Haruna Iddrissu is Ghana’s communications minister. He tells reporter Peter Clottey that with Washington’s cooperation, the new administration is determined to win the fight against the growing narcotic menace.

Former opposition leader Professor Atta-Mills took over early in January this year after a smooth transfer of power from the then ruling New Patriotic Party when he won the last December general election run-off. This was Ghana’s second successful smooth transition from one legitimately elected leader to another in the country’s history.

Iddrissu said Ghana has shown its desire to entrench the tenets of democracy.

“We have demonstrated to the rest of the world that democracy will work and can work in Africa. And president Mills and the NDC (ruling National Democratic Congress) are committed to deepening multi-party constitutional democracy and deepening democratic values and culture within the body politic of Ghana,” Iddrissu noted.

He said the new Ghanaian government is determined to win the fight against the growing narcotic menace across West Africa.

“We are particularly encouraged by his (Obama’s) readiness to cooperate with the government of Ghana to fight the illicit drug trade. It has become a major, major problem of our government,” he said.

“You will recall that under the previous administration, the image of our country was bruised internationally in terms of our funding and our inability to fight the narcotic drug trade. President Mills is committed to reviewing the current Narcotic Drugs Board into establishing a strong commission responsible for narcotics, and the law will accordingly be reviewed. But to be successful in our fight against the illicit drug trade, we need international cooperation and understanding. We need international collaboration and support and that is why government is particularly excited about this call from President Barack Obama,” Iddrissu said.

“We want to recognize that the U.S. government has been supportive of Ghana’s economic, social and democratic development. I recall the 541 million dollars that government got under the Millennium Challenge Account, which is benefiting areas such as agriculture, road infrastructure and many other areas of our national economy,” he said.

“It certainly means that President Obama has confidence in the new administration and trusts our commitment and our pledge to deal with the illicit drug trade. And he is extending a hand as a collaborator and he is extending a hand in support of President Mills’ effort to fight the illicit drug trade, which is becoming a major problem for our country and a major problem in our country,” Iddrissu pointed out.

“The relationship between Ghana and the U.S is already one which is healthy. The bond of friendship exists from independence up to today and the foreign policy pursued only a few days ago His Excellency the President embarked on good neighborliness agenda when he visited neighboring countries. With this call (from President Obama) it means that he has a leverage to extend entrenching relationship with the west notwithstanding the global economic crunch, we expect some support in order to be able to face our development challenges of the country. And this means that we can count on the U.S government’s support and its influence in international politics,” he said.