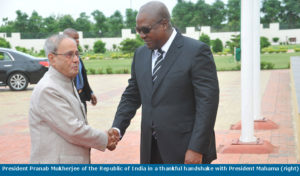 The agreements are: The exemption of visa requirements of holders of diplomatic passports, Memorandum of Understanding (MoU) on the establishment of a joint Commission and the MoU on foreign services between the two Foreign Affairs Ministries.

The agreements formed part of the bilateral discussions held over the years.

Speaking before the agreements were signed, President Mahama said the two countries had been holding bilateral discussions on agricultural productivity and research, nuclear power for development, and rural electrification.

He said also that similar discussions had been held on the provision of the $ 35 million Komenda sugar factory and the $ 24 million facility for the cultivation of sugarcane to feed the factory sugar.

President Mahama said discussions were held on the financing of the fish processing projects in Ghana and a facility of $ 30 million to update the Yendi Water project in the Northern Region.

The President said discussions were far advanced for the Tema-Akosombo railway lines project and programme for the modernisation of agriculture especially in agro-processing.

On transportation, President Mahama said Ghana is collaborating with India to acquire heavy duty buses to improve on urban transportation throughout the country on account of their expertise in TATA and Ashok Leyland vehicle manufacturing.

President Mahama said India is the second largest investor in Ghana with about 700 registered companies and his government would forge ahead to establish an energy centre for energy renewal to serve existing and yet to be established companies.

“We are also engaged in a joint infrastructural project especially in the areas of railways construction, and solar plant development. One area that is worth considering is the international security collaboration,” he added.

“India will therefore deepen bilateral relations…in the areas of trade, investment and the expansion of economic cooperation in the coming days of our cooperation.”

He expressed the hope that Ghana would receive a substantial amount of its share of the $10 billion facility India is availing to African countries in the next five years as part of their agreement signed in October, 2015 during the India-African business forum in New Delhi.

He gave the assurance that India would do everything possible to ensure that more support and assistance was channeled to Ghana under their new agreements to move Ghana up in the international political economy.

The visiting Indian President who also planted a tree of life at the Flagstaff House to symbolize the cordiality between Ghana and India later in the day visited Kwame Nkrumah Mausoleum, where he laid wreaths.

He also unveiled the statue of former Indian leader Mahatma Gandhi at the Institute of Statistical, Social and Economic Research at the University of Ghana and held a business forum.