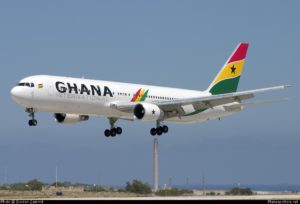 Ghana International Airlines (GIA) has pegged its revenue losses so far as a result of the Icelandic volcanic disruptions at a provisional figure of approximately US$ 500,000.The amount, the Airline says represents the cost it has incurred by way of lost-revenue for the past one week since the phenomenon begun. Globally, the International Air Transport Association (IATA) estimates that the crisis cost airlines revenues of more than 1.7 billion dollars as at Wednesday April 21.This, the association has emphasized is devastating for an industry that lost 9.4 billion dollars last year and was forecast to lose a further 2.8 billion dollars in 2010. GIA however resumed its operations on Wednesday with its first flight from Accra to the United Kingdom at 11:30 pm after receiving clearance from the UK Civil Aviation Authority.Speaking to CITI BUSINESS, the Chief Executive, Gifty Anna Myers says the revenue loss of 500 thousand dollars is as a result of the suspension of flights to its three destinations for a whole week. â€œWe have three destination points, we have Kotoka International, we have Gatwick London and then we have Dusseldorf in Germany, so these three come together. And we havenâ€™t flown in the last week to any of these destinations, so we are looking at approximately $500,000 US Dollars which weâ€™ve lost so far.â€She says that their immediate priority for now is making arrangements for the backlog of passengers scheduled to fly on GIA rather than plans towards recovery of the losses. â€œWe have to repatriate our passengers thatâ€™s our No 1, before we even look at what next because people are stranded, and it’s not the fault of any airline operator it was caused by a natural phenomenon, but they still are stranded and we have to try and get them to their destinations, so that is our primary concern although initially safety was paramount now we have clear instructions form the UK civil aviation that itâ€™s safe to fly.Weâ€™ve resumed and we’re doing so.â€She added they are still receiving regular updates from the Air traffic Control to know their next line of action