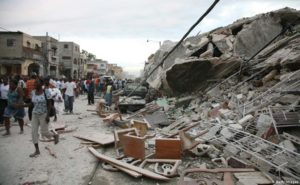 Ghana has been noted as the second highest donor to Haiti after Guyana based on donor countriesâ€™ Gross Domestic Product (GDP).Details of financial aid and other assistance to the people of Haiti being tracked by the UN Office for the Coordination of Humanitarian Affairs (OCHA) which was released recently by the Data Blog, which is hosted on the UK Guardian newspapersâ€™ website and sourced to Relief Web has shown that contributions captured as at January 24, 2010 shows Guyana as the â€˜most generousâ€™ country in terms of its financial pledges when measured against the countryâ€™s GDP. The report indicated that Guyana is the third poorest country in the hemisphere, after Haiti and Nicaragua.Haiti suffered a destructive earthquake recently which killed several thousands and injured many citizens leaving its people in distress needing help very badly.Ghana made a donation of $3 million to the government and people of Haiti. The country also gave some cocoa products and medication.Some Ghanaian organizations including musicians are also making efforts to raise money and relief items to help the people of Haiti. A Ghanaian charity, the Caring Kids International has launched a fundraising effort to raise $1 million for Haiti. On Saturday a representative of the group, a student, Len Kessie arrived in Haiti as part of the groupâ€™s efforts.According to the released data the Guyana National Committee for Haiti Relief has raised close to $260 million.A report by the Stabroek News said after Guyana and Ghana, Canada was third, followed by Sweden, Estonia, Denmark, Spain, Finland, Norway and Australia. The US was ranked as the country which has pledged the most cash to Haiti with a total of $168 million followed by Canada $131 million, Spain $45 million, UK $32 million, France $31M million, Sweden $23 million, Germany $20 million, Brazil $15 million, Australia $14 million and China $13 million.Meanwhile, pressure is being mounted on Haitiâ€™s creditors to write off the countryâ€™s debts.