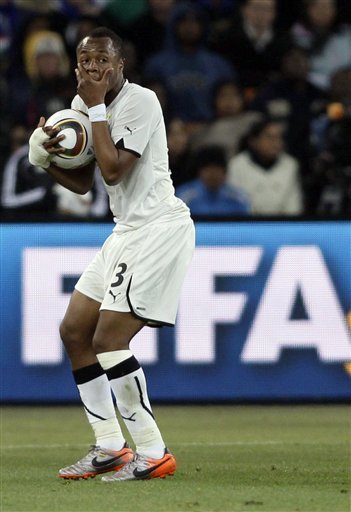 The FIFA Disciplinary Committee has turned down an appeal made by the Ghana Football Association to can cancel the yellow card shown to Andre Ayew in the 2010 FIFA World Cup match between the US and Ghana on 26 June.

Andre Ayew will thus serve a one-match suspension, meaning he misses Ghanaâ€™s quarter-final match against Uruguay on 2 July after being booked for the second time at the tournament during last Saturdayâ€™s round of 16 clash with the United States.

The GFA immediately after the match requested to have referee Viktor Kassaiâ€™s decision looked into again and overturned.

â€œHowever, according to article 77 b) of the FDC, the disciplinary Committee is responsible for rectifying obvious errors in the refereeâ€™s disciplinary decisions.

â€œTo this end, the Disciplinary Committee pointed out that the referee saw the incident leading to the yellow card for the player and clearly indicated in his report that the reason behind this measure was that Andre Ayew committed a reckless tackle against the opponent.

â€œThe Committee therefore excluded that article 77 b) of the FDC could be applied in such a case.

â€œIn the light of the above, the FIFA Disciplinary Committee concluded that the request filed by the Ghana Football Association is rejected and confirmed that the player Andre Ayew, who has received two yellow cards in two different matches in this tournament, shall serve his one-match suspension in the match URU v GHA of 2 July 2010,â€ a statement by the Disciplinary Committee stated.