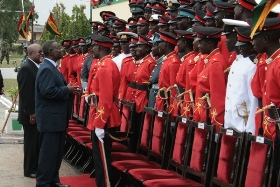 Accra, Nov. 11, GNA – President John Evans Atta Mills, on the occasion of this year’s Remembrance Day on Thursday, laid a wreath on behalf of the Government and people of Ghana to honour Ghana’s military heroes. President Mills signed the Remembrance Book.

The ceremony took place at the Christiansborg War Cemetery at Osu in Accra under canopies where a sea of black and red colours dominated. Five other wreaths were laid to mark the day, also known as Poppy Day or Veterans Day.

Mr Nicholas Westcott, British High Commissioner in Accra, laid one on behalf of the Commonwealth; Mr Jean Pierre Gbikpi-Benissan, Dean of the Diplomatic Corps laid one for the international community; Lieutenant General Peter Augustine Blay, Chief of Defence Staff laid one for the Ghana Armed Forces; Air Vice Marshall Odartey Barnor for Veterans; and the last one on behalf of the traditional rulers in the Ga State. Remembrance Day is observed on November 11 to commemorate the sacrifices of members of the armed forces and civilians in times of war, specifically since the First World War.

It is observed to recall the end of World War I in 1918 as major hostilities of World War I formally ended at the 11th hour of the 11th day of the 11th month of 1918 with the signing of the Armistice. Ghana, then the Gold Coast and part of the British Empire, also sent her sons overseas in this war and some lost their lives. Both Christian and Islamic prayers, containing words of comfort and appreciation of the heroic deeds, as well as good repose of the departed, were said.

Thereafter, there was the call to remembrance and the sounding of the knell and the farewell call.

Elegies in slow movement music were sounded as the ceremony progressed. A contingent of Ghana’s gallant ex-servicemen in old and plain military khaki uniforms, with their peps and colours, marched past the presidential dais, as they saluted the President and took reserved seats.

A two-minute silence sandwiched the last post and the reveille. The central element of the Remembrance Day ceremony is a two-minute silence sounded by a siren at the 11th hour, during which all movements should cease, so that in perfect stillness, the thought of everyone may be concentrated on the revered remembrance of the dead. Also during the period towards Remembrance Day, artificial poppies are worn for peacekeepers, who died in the course of duty, around the world. Poppies are sold as a means of raising funds to support veterans, especially the disabled and hospitalised. The ceremony was attended by top Government officials, Service Commanders, Ministers of State, traditional rulers of the Ga State, members of the Diplomatic Corps as well as both retired and serving officers and men of the Ghana Armed Forces. 11 Nov. 10