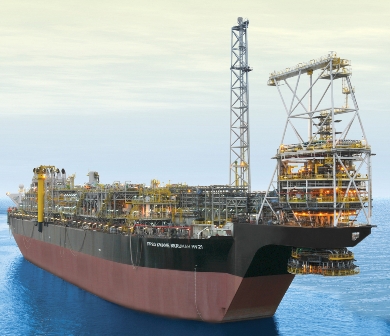 The West African nation of Ghana has begun to pump its first commercial oil after the discovery of the offshore Jubilee Field three years ago.

President John Atta Mills turned on the valve at an offshore platform.

A consortium led by UK-based Tullow Oil hopes to produce 55,000 barrels per day, increasing to 120,000 barrels in six months.

Wearing safety gear and blue overalls, the president opened the valve in a televised ceremony some 60km (40 miles) off the coast from the town of Takoradi, Reuters news agency reports.

The discovery of oil off Ghana’s coast has raised questions about whether Ghana can escape the “resource curse”, where discoveries of valuable commodities fuel conflict and corruption instead of funding development.

Analysts have raised concerns about the lack of laws to manage oil revenue and the lack of an independent regulator for the sector.

The government has said it is working to get an oil bill passed.

The government has forecast that the oil will boost Ghana’s economic growth rate from 5% this year to as much as 12% next year.

Production is eventually expected to bring in $1bn a year.

The Jubilee Field is estimated to hold 1.5bn barrels of oil. A second offshore field was discovered in September that is believed to hold another 1.4bn barrels.

The fields are some of the largest oil deposits found in recent years.

Observers say militant insurgency like that in nearby Nigeria’s Niger Delta is unlikely as long as the government manages expectations.

“Transparency to population is very important,” said Stephen Hayes, head of the Corporate Council on Africa – a group of some 180 mainly US firms that invest in Africa.

“They also have a fairly transparent society compared to other countries dealing in oil – so they’ve got a better opportunity to get it right,” he told the BBC’s Focus on Africa.

He says lessons can be learnt from others’ mistakes and points out that Ghana’s economy is more diversified than other oil-producing countries in Africa. It earns billions from cocoa and gold.

“The oil revenues expected only represents 6% of their economy – compare that to Nigeria where oil revenue represents 92% of the economy or Angola where it’s almost 100%,” he said.

“It indicates they won’t be dependent on oil revenue… and are in a far better position to manage it more wisely.”

The BBC’s David Amanor in the capital, Accra, says there a positive mood about the pumping of the country’s first oil – and plenty of advice about how the revenue should be spent.

“I’m very much excited because maybe that will be able to solve some of problems for us,” a lottery-ticket seller said.

“The first area should be education, secondly agriculture and thirdly health.”

Another man said the move was a blessing for him and the country.

“It’s going to benefit me so I’m really excited. I’ve completed school but I’ve not found any work to do – I hope oil will help me to get a job.”

Our reporter says Ghana also has a growing civil society community which is anxious to ensure environmental and development considerations are given a voice in the area where the oil is being bumped.

“A lot of the fishermen are now moving away because of the oil rig – they cannot fish within a certain parameter,” says Adwoa Bame from the Women’s Initiative for Self-Empowerment group.

“The men go out and bring the fish to the fishmongers, who are normally women,” she told the BBC.

“So we need to look at how we can develop programmes that can sustain these communities in terms of livelihoods.”