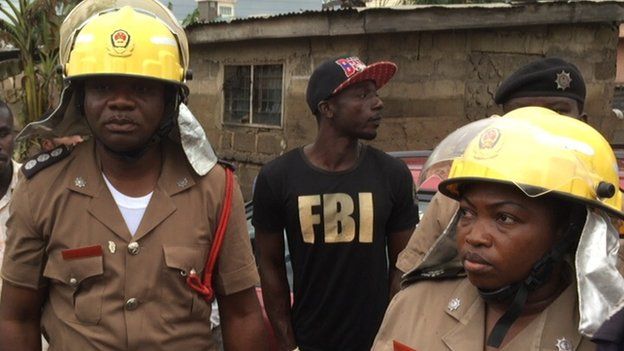 Ghanaians are being questioned about the cause of a petrol station fire in the capital, Accra, in which some 150 people died on Wednesday night.

It is believed flood waters carried fuel from a garage storage tank towards a nearby fire, causing the explosion.

But the fire service is trying to establish where exactly it started.

The salvage operation is continuing as residents say they are finding more bodies of victims killed in the fire and the flooding that has hit the city.

Three days of national mourning will start for those all those who died on Monday, once the official death toll is known, the government says.

President John Dramani Mahama has described the incident as “catastrophic” and “unprecedented”.

People had sought shelter at the petrol station after being stranded by flooding and rain; buildings adjoining the garage were also burnt.

The president has vowed to take tough measures to stop people building illegally on stream beds during the dry months.

They pour rocks and sand onto the beds before constructing buildings, so when the rains come the water rises and is diverted into nearby communities causing flooding.

“I think that the time has come for us to remove houses out of water and the public should understand that it is necessary to save everybody else,” President Mahama said.

One of the investigators, Harriet Nunoo, told our reporter that it had been established that fuel had spilled from the petrol station and mixed with flood waters sweeping into nearby homes, where it had come into contact with naked fire.

Some young men became angry, denying they caused the fire.

One witness suggested that the fire started when a cigarette was dropped, our reporter says.