At least 150 people have died in a fire at a petrol station in Ghana’s capital, Accra, the country’s president says.

The fire on Wednesday night started as people in the city were trying to cope with two days of heavy rain, which has left many homeless and without power.

The flooding hampered rescue efforts and may have led to the fire, the BBC’s Sammy Darko reports from Accra.

It is thought that people were in the petrol station sheltering from the downpours when the fire broke out, our correspondent says.

President Mahama visited the burnt-out petrol station and described the deaths as “catastrophic” and “almost unprecedented”.

He vowed to take tough measures to stop people building on waterways, which appeared to have been a factor in the disaster.

“I think that the time has come for us to remove houses out of water and the public should understand that it is necessary to save everybody else,” he said.

Following an emergency meeting of cabinet and security chiefs on how to tackle flooding, the government says it will release £9m ($14m) to help flood victims.

Schools were closed across the capital and children asked to stay at home.

Bus conductor Yaw Aforve was sleeping in his vehicle which was parked at the petrol station when the fire started.

He said he jumped into the floodwaters and when he came up for air, the fire burnt his face.

“I was swept away by the water to the other side [of the road],” he added. “I saw so many people screaming and shouting.” 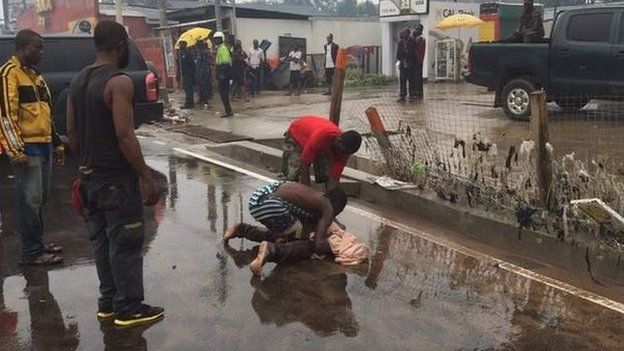 Two days of heavy rain has brought much of the city to its knees.

There are chaotic scenes with cars being carried away by the water and many roads blocked off.

Hundreds have been trapped in their offices and some have been forced to spend the night in their cars as traffic came to a standstill.

Parts of Accra have been left without power as electricity sub-stations have been damaged in the flooding, which is making the ongoing energy shortages even worse.