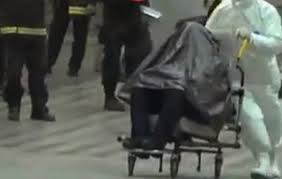 Ghana has expressed ire against the Czech Republic over the inhumane handling of a Ghanaian student suspected of carrying the deadly Ebola virus.

The student – one of four Ghanaians – who arrived in the European country for studies Saturday was quarantined on suspicion of carrying the haemorrhagic fever.

The student who passed security screening at the Prague Airport was later arrested at a railway station and was wrapped in black plastic to an isolation centre. About 15 officers from the capital’s Rapid Response Squad took part in the operation.

Footage from the scene showed a man wearing biohazard suit pushing a luggage cart with the Ghanaian sitting on it almost completely covered by the black plastic.

Ghana’s Ambassador to the Czech Republic, Zita Okaikoi, has said although nations are on high alert to protect their citizenry from contracting the deadly disease that has consumed 4,447 people mainly in West Africa, the Ghanaian could have been handled humanely.

She told STARR FM Tuesday that the Mission will write formally to the Czech Authorities to complain about the “unfortunate” handling of the Ghanaian citizen.

In an earlier statement, Ambassador Okaikoi confirmed that the unnamed student has since been released. “After the quarantine process, the Health Ministry reportedly stated that the suspected individuals were suffering from cold and not the Ebola virus as earlier suspected… The students have since been released and are in Pardubice to undertake their studies in the University.”

Ghana has tested more than 100 suspected Ebola cases, but none has proved positive.