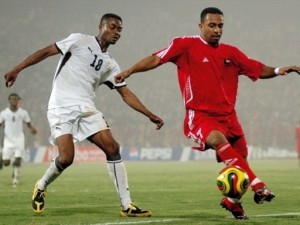 Ghana beat Sudan 2-0 on Sunday to become the first African team to qualify for next year’s World Cup finals in South AfricaInter Milan midfielder Sulley Muntari opened the scoring midway through the first half in Accra in what was a dominant display from the group leaders.

The result coupled with closest challengers Benin and Mali drawing 1-1 in Cotonou a few hours before left a Ghanaian side boasting a 100 percent record with an unassailable seven-point Group D advantage.

It will be the second successive World Cup appearance for Ghana, who did best of the five African teams in Germany three years ago by reaching the knockout second round before losing 3-0 to defending champions Brazil. A quarter of the 32 qualifiers for the first World Cup to be staged in Africa are known with Ghana joining Australia, Brazil, Japan, Netherlands, North Korea, South Korea and hosts South Africa.

Mali had threatened to put Ghanaian celebrations on hold by taking the lead through former France youth international Mamadou Samassa on 71 minutes only for Mohamed Aoudou to equalise three minutes from full-time.